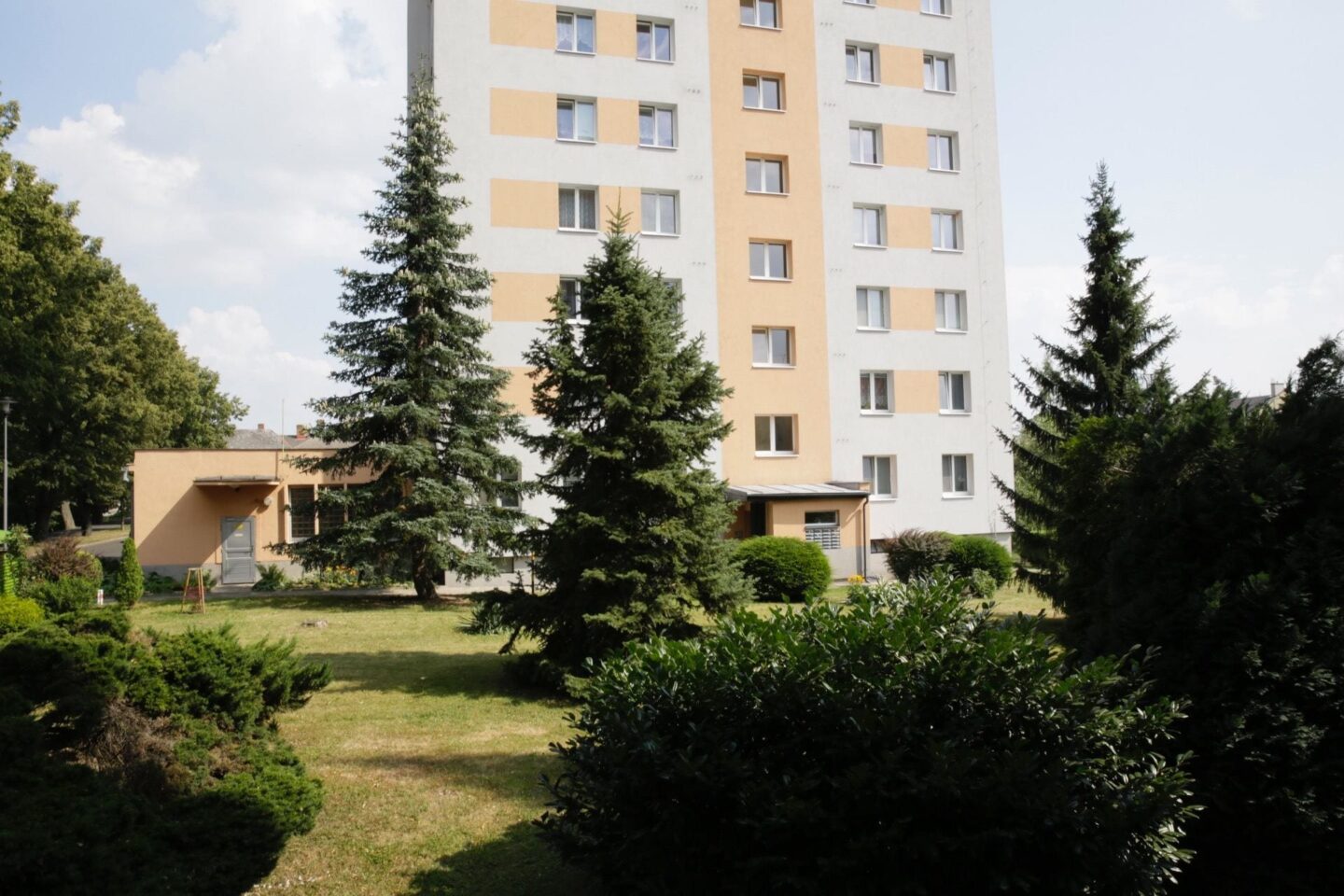 What today is called družstevní samospráva U Opavice 2-4 (U Opavice 2-4 self-governing coop unit) consists of three seven-story prefabricated apartment buildings (paneláky) and the surrounding lot located at U Opavice 2, 3 and 4 in Opava. The coop unit was originally established as an independent housing coop (družstvo), but since 1973 it has operated as a self-governing coop unit (družstevní samospráva) within larger coop associations, whether SBD Stavbař (1973-1980 and 1991-present) or SBD Rozvoj (1980-1991).

Established in 1963, the original name of the coop that was to build the three U Opavice apartment blocks (paneláky) was “Stavební bytové družstvo zaměstnanců n. p. Moravskoslezská armatura, závod Minerva v Opavě” (Housing coop of the employees of the Moravskoslezská armature firm, Minerva plant), although soon that name was shortened to SBD Minerva, U Opavice 2-4.

The coop was established by Minerva employees (with some Ostroj employees joining as well) who needed quality housing, of which there was severe shortage in Opava at the time. As discussed elsewhere, the city was severely damaged during the WWII, and while some housing became available with the expulsion of German population post 1945, the existing housing no longer met the rising living standards. Especially young families were demanding new, quality flats with modern, private facilities. With the socialist state increasingly emphasizing heavy industry and coal mining, Opava was being transformed into an industrial equipment supply city for the nearby Ostravsko-karvinské mines and Vítkovické iron-works. With the goal of supplying the engineering needs of the Ostrava mines and iron works, Ostroj, a new engineering plant and foundry, was founded in 1949 in Opava. And in 1953, Minerva, originally the largest producer of sewing machines in Czechoslovakia (and prior to 1918 in the Austro-Hungarian empire), was converted into a producer of industrial valves (armatury). These and other industrial plants in Opava had five-year socialist production plans to meet, needed contented workers, and looked to provide quality housing for their employees. Many of them encouraged their employees to establish housing coops once this became an option in 1959.

In 1963, the Minerva plant founded a housing cooperative with the goal of building three eight-story apartment buildings, altogether 72 flats, in U Opavice street. 24 of these apartments would be two-rooms-plus-kitchen flats (49.98 m2) and 48 would be three-rooms-plus-kitchen flats (63.03-64.16m2). The lot that would be used for this purpose consisted at the time of several extended back yards (zahrady) of private family houses on the adjacent U střelnice street and of small gardening plots used by the inhabitants of an already existing “Minervák,” which was an old Minerva apartment building (three storied, with shared facilities) also on U střelnice street. Since the Minerva plant did not in the end fill all of the 72 planned flats with its employees, they offered the extra apartments to Ostroj, while several other remaining flats were allotted to workers in other heavy industry enterprises, such as the Ostrava coal mines.

Karel Lyko, an employee in Minerva’s department of planning, became the first head of the coop. He worked with the bureaucracy of the Opava city national committee and the Krajský investorský útvar (Regional Office of Investment), steering the construction project towards a successful end. These were large concrete panel-based tower block buildings, and thus they could not be built by the system of self-help (svépomoc), and the coop hired the Pozemní stavby Ostrava building contractor. Housing coops at the time had access to construction materials at subsidized prices, which cut the final costs. During the later self-help construction of 31 coop garages and the playground, various materials and equipment were supplied by the Minerva or Ostroj plants, thus again keeping the building costs at minimum.

With the socialist state being pressed to provide quality housing quickly, the apartment blocks, assembled on the spot from standardized concrete building panels, became the preferred type of construction over the traditional lower brick houses whose construction was more labor intensive and took significantly longer. Many of the interviewees (Jusa, Lyko, Hampel) emphasized that there were differences between various types of prefabricated blocks (paneláky) being built at the time, depending on the panel systems used in the construction. While the earliest panel systems were only 20 centimeters thick, post-1962, new, thicker “blokopanel ze struskopemzobetonu” (width 35 centimeters) came to be used, which provided somewhat better heat insulation. These were also used in the construction of the U Opavice paneláky.

The construction of the three paneláky started in June 1964 and was completed in August 1965. The first inhabitants moved to the first apartment block (U Opavice 2) already in the winter of 1964.

The planned cost of the construction was 4,446,884 Kčs, of which 1,074,000 Kčs was to be paid from membership contributions, 1,442,400 Kčs was directly subsidized by the state, and 1,930,484 Kčs was to be paid from a long-term investment loan (with 1% interest over 30 years) provided by the State Bank of Czechoslovakia (Státní banka československá). Since the actual cost ended up being only 4,436,883 Kčs and thus by 137, 957 Kčs lower than originally planned, the loan amount was reduced.

The individual member contributions were: 14,095 Kčs for a two-room apartment and between 16,907 and 17,474 Kčs for a three-room apartment. Many coop members received further, low or no interest, loans from their employer to pay for their coop membership fees (their rent). Some employers even offered the so-called stabilizační půjčky (stabilization loans) – if an employee promised to stay with the firm for a certain number of years, up to 90% of the housing loan provided by the firm was erased.

Between 1963-1973, the Minerva coop functioned as an independent housing cooperative. During this time, a number of housing coops were established in Opava, often by employees of local plants and enterprises. According to Kronika SBD Stavbař, in 1974 there were 27 housing coops in the Opava district (okres), of which 13 were located in the town of Opava itself. On the territory of the Severomoravský kraj (North Moravian region) there were 304 housing coops registered, with 98,547 members (page 8).

The regime began to call for the consolidation of housing cooperatives, and in 1973, the Regional Committee of the Czech Union of Housing Cooperatives in Ostrava (krajský výbor Českého svazu bytových družstev v Ostravě) decided to merge the individual small coops in the Opava distict into four larger housing coop organizations, including SBD Stavbař, Opava- Krnovská 2. The previous small independent coops would no longer be called cooperatives but družstevní samosprávy – self-governing coop units. Eleven of these small coops, including SBD Minerva, were merged into a single housing cooperative SBD Stavbař.

Kronika SBD Stavbař includes a description of all of the coops that were integrated into Stavbař. SBD Minerva is here described as follows: “SBD of the employees of Armaturka Minerva was established in 1963. On their lot along the river Opavice, near the Gottwald park, the coop had three seven-storied blocks built by a contractor, with 72 apartments and a boiler room. In the vicinity of the apartment blocks the coop members built, by self-help, 31 garages and a playground, which they also equipped. They landscaped the grounds and sewed the lawn . . . and created a very pleasant environment for living and socialist cohabitation. Every year, the coop organizes a Day of Children on its playground” (p. 22).

After joining the SBD Stavbař, the U Opavice 2-4 (formerly SBD Minerva) unit was thus no longer an independent housing coop but rather a self-governing unit within a larger housing coop, and this is the situation today as well. Each coop unit within the SBD Stavbař was, and today again is, headed by an administrator/head, who convenes membership meetings twice a year. The SBD Stavbař coop itself convenes the Assembly of Delegates- attended by a proportional number of delegates from each member self-governing unit — twice a year, and this Assembly of Delegates is the highest decision-making body of the coop (nejvyšší družstevní orgán).

While the SBD Stavbař was nimble and efficient in its operations, throughout the 1970s the socialist regime was pushing more and more assertively for further centralization of all organizations, including cooperatives, and there were efforts to further merge the four existing Opava district housing cooperatives into a single large housing coop, SBD Rozvoj. According to interviewees Kostka and Hampel and according to Kronika SBD Stavbař, this was a highly unpopular plan as the existing cooperatives consisted of self-governing units of similar size and similar budgets and were considered effective and efficient. Two Assemblies of coop delegates voted against the integration into SBD Rozvoj, yet in spite of this unambiguous rejection of the plan, and against the official rhetoric of “centralized democracy,” Krajský výbor ČS SBD in Ostrava (Regional Committee of the Czech Union of Housing Cooperatives) decided for the merger. On July 1, 1980, the SBD Stavbař, SBD Vítkov and SBD Hlučín were integrated into a single unit with the SBD Rozvoj.

Between 1980 and 1991, the U Opavice 2-4 self-governing coop unit was operating under the housing coop Rozvoj. But with the new law concerning coops passed in 1988, several of the Rozvoj self-governing coop units launched an effort to separate from SBD Rozvoj, considered too large and consisting of housing projects of too divergent sizes, budgets and priorities, and in 1991, the U Opavice self-governing unit, along with several others, left SBD Rozvoj and recreated the smaller cooperative SBD Stavbař, Krnovská 2. This is the situation today as well.

The post-1989 period has brought major legal changes connected with the country’s transition to the market economy and privatization. The umbrella cooperative SBD Stavbař is now legally the owner of the property of its member coop units (including the U Opavice 2-4 coop unit). According to Vojtěch Kostka, the current and log-term head of the U Opavice coop unit, SBD Stavbař does not interfere with its members’ decisions; rather it is in an advising role in relation its member coo units.

In terms of the individual members/tenants, the SBD Stavbař has opted for a mixed ownership of flats. As of January 2019, 50% of the U Opavice 2-4 coop members have purchased their apartment (along with a fraction of their apartment building’s real estate) while the rest of the U Opavice 2-4 tenants continue their coop membership without direct private flat ownership. The buildings and the surrounding lot remain the property of the coop unit (samospráva), which manages the real estate as a non-profit corporation.

Navigating through the legal changes post-1989 has been a major challenge for the housing coops, including SBD Stavbař, especially since, according to several of the interviewees, the post-socialist state originally declared intentions to demolish all forms of coops in its post-1989 effort to transform all property into private ownership. Other challenges faced by the U Opavice 2-4 coop unit have included technical ones, such as the 1997 reconstruction of the boiler room from a coal fired to a natural gas fueled system, the clean-up after the 1997 Opava river flood, and especially the process of an overall revitalization of the three apartment blocks in 2011, which included coating the towers with new, efficient insulation, replacing the lifts, as well as replacing the entire housing core (bytové jádro) in all three apartment towers. Thanks to the efforts of Vojtěch Kostka, who has been the U Opavice 2-4 coop unit head since 1995 (and also several times before), the coop unit managed to secure a green grant that subsidizes 94% of their revitalization loan. About half of the loan has been successfully repaid as of now.

History of the U Opavice 2-4 apartment towers (72 flats) coop affiliations:

1980-1991: All Opava housing coops, including SBD Stavbař with its U Opavice 2-4 member unit, were integrated into a single large housing cooperative SBD Rozvoj.